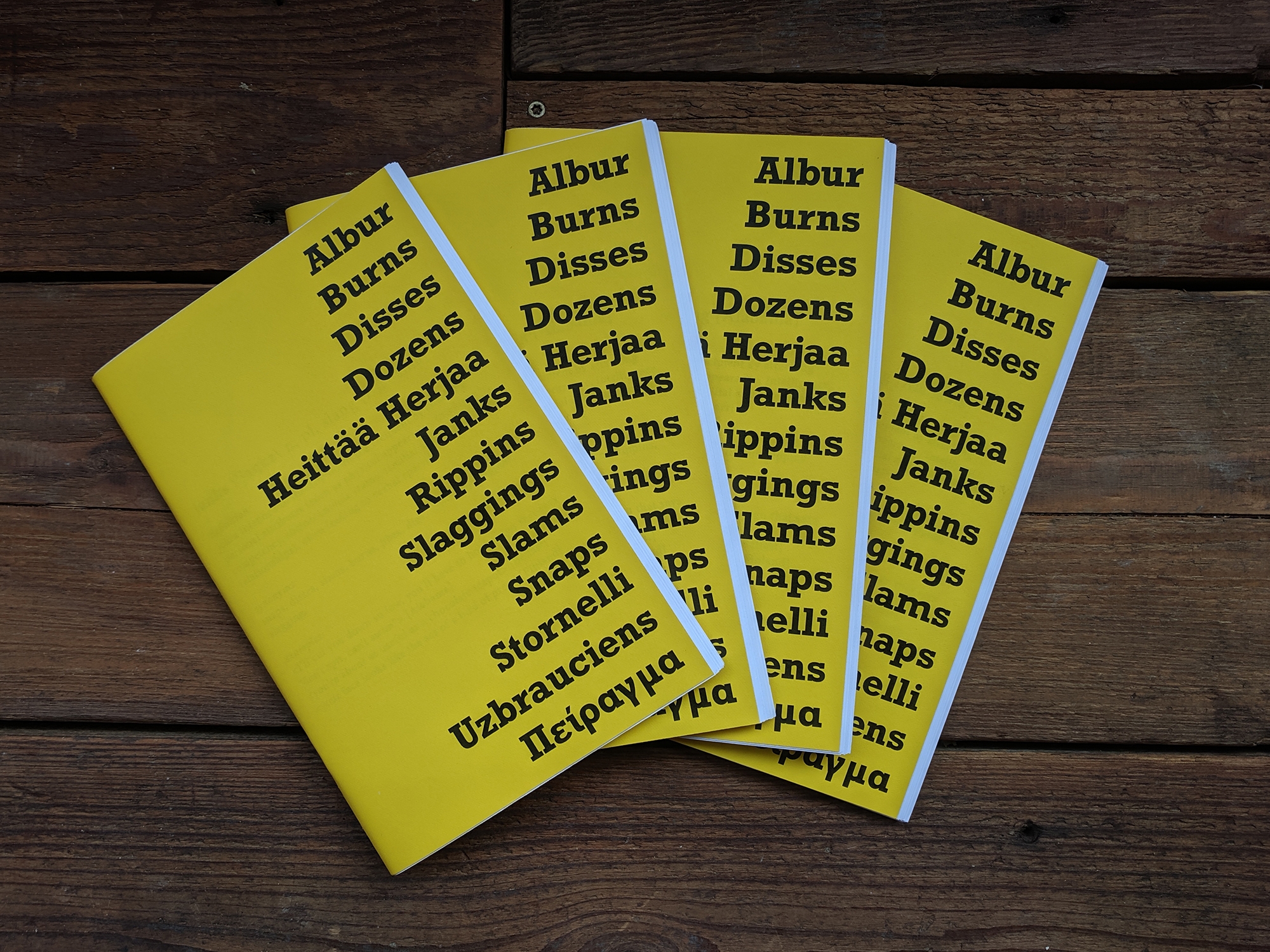 A JANKS READER
Selections from the Janks Archive research library

Produced for the 9th Inter-format Symposium on the Fluidity of Humour and Absurdity
Nida Art Colony | Lithuania | June 28-30, 2019
nidacolony.lt

*Download PDF
*Available for purchase through The Concern Newsstand

The Janks Archive project was born from confusion. One evening in October of 2012, the three of us were listening to filmmaker/archivist Harry Smith’s audio recordings of poet Peter Orlovsky trying to remember songs from childhood. We started doing the same and ended up in a Yo-Mama joke battle. Jerstin was the clear winner of this exchange, and after mining his subconscious for every joke he could recall, we learned that he referred to these types of jokes as “janks.” Jessica and Ben grew up in Ohio (northern Midwest) and had never heard this word. Jerstin, who is from Alabama (the “Deep South”), had assumed this was the universally accepted (English) term used to describe the act of trading insult jokes among friends.

Questions emerged from this exchange — Is this insult joke tradition a universal human behavior? Do the terms used to describe this ritual differ from place to place, even within the same country/language? Are the types of jokes/insults (i.e. format, theme, subject) site-specific to a place/region? What can be learned about a culture through what is considered insulting?

In the spirit of folk archivists like Alan Lomax or Harry Smith, who sought universality through collecting eccentric cultural artifacts and everyday ephemera, we decided to embark on a never-ending process of trying to answer these questions. Since 2012, we have travelled to 16 cities in 9 countries interviewing locals and documenting “janks.” In each place we visit, we learn new terminology and new jokes.

To hone our research further we have established a rule about what we archive and what we don’t. To be considered a “jank” the joke needs to be intended to directly insult another person in a face-to-face interaction. These jokes can attack personal attributes (such as physical appearance, intelligence, socioeconomic status, familial and interpersonal relationships, etc.), but they can’t be directed at large groups of people or anyone who is not physically present at the time. We do not want to document or perpetuate racist/sexist/bigoted humor, however many good “janks” push the limits of acceptable topics, cultural taboos, and (importantly) our own comfort zones.

Race, class, gender, and the body can be spear points of contention but also provide rich mines for discussion of forbidden subjects in both art and humor. What Mikhail Bakhtin calls “unofficial elements of speech” — abuses, curses, profanities, and improprieties — allow proximity to discomfort and ideas that might be at odds with our values. The recent socio-political climate, particularly in the US and Europe, has given rise to political correctness and inclusivity in language while, at the same time, a surge of xenophobia and nationalism. What can be learned from vernacular humor (particularly insult humor) as a model for how to deal with conflict symbolically and across boundaries?

The Janks Archive project is driven by the desire to increase understanding of an oral tradition which on the surface seems antagonistic, but may ultimately be an invitation for exchange and mutual understanding.

This zine is a compilation of readings and research that we have collected over the course of this complex and complicated study. We’ve included selections from academic texts, reference material, images, and jokes that have influenced our thinking about verbal abuses and joking relationships. We have scanned these excerpts without permission, however we have included author/publisher credits in the hopes that this will lead the inquisitive to the complete texts for further reading.